In Review Of: World's End Volume 1 by Tim Perkins 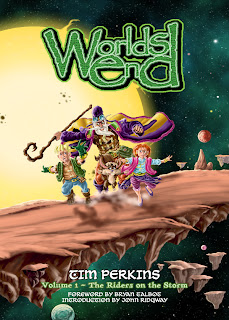 Very few times has someone pulled off such a beautiful thing as actually showing us the end of the world, meaning the true edge, where the water falls off into the cosmos, and the final inches of land give way to the stars and nebulae. Three quarters of the way into his debut graphic novel, one printed in full color and in a very handsome hardback edition, Tim gives us that edge shot on a two page spread with full bleed... and then dives back into his story, what appears to be a young adventure coming of age story, repleat with wise magician, evil villians from another dimension and even a mysterious girl who may or may not eventually become a love interest to young Ralf.

I had the pleasure of working with Tim back in the '90's at Defiant Comics, and it was clear from the long hours of working on pages with him that there was far that he wanted to do story-wise. Cutting his teeth on the fledgling British comics scene before coming over the states, he learned all sort of craft and it all shows up here. Jim Shooter's emphasis on clean, clear storytelling shows up here, as there is no point in the novel that you see style over substance, to where the art overwhelms the story. I bring this up because it is so important that, in a graphic novel that could very well target a younger reader, you don't want to lose them along the way. They will be come vested in your characters by story, not by endless splash page after page. Tim does a great job of keeping the story moving forward in a clear and concise manner. 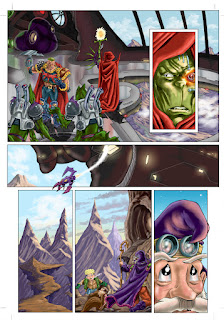 And the color is brightly rendered, giving the book a full, rich sweep of colors to the panoramic shots of the alien worlds. This is no cheat, where the artist draws the background once and then conveniently saves time by dropping the background out. Tim doesn't skimp: we are front and center in a world not of our making from the first page, and it never lets up. As much attention is lavished on the interior of the invading alien's spacecraft as it is to the beautiful desert panoramas.

The story is an introduction to a much larger world, and on these coming of age stories, there is much that is saved for the later volumes. We get a scant three pages worth of the young girl Zephol, and i'm assuming that she'll play a much larger role in the narrative since she gets to be on the cover, but we spend very little time with her in the book. The majority of the book is devoted to Ralf, local scamp and royalty, and the Mathemagician Gweldar, who is equally at home casting some spells as is flying a scud bike, so he had a foot in each world as well. Unfortunately we barely get started on our quest to the World's End before we're at the end of volume 1.


Tim has long been documenting how work on the first volume over at his blog Wizard's Keep, and you can order this first volume over the web here. Go take a chance on a new author making a big leap and publishing his own work! Supporting artists directly is best way, obviously, to keep them creating new and entertaining works for us to read. (Tim also does a great job of detailing the backstory of the making of World's End in the book, describing his process in the creation of the work. Wonderful material for any aspiring artist perhaps motivated to try his or her own hand at creating the their own work.
Posted by inkdestroyedmybrush at 7:02 PM