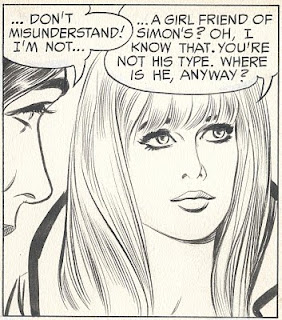 How do we represent the faces of women? Are we culturally bound to try to duplicate what pleases our eye thinking that it will please the eyes of others? But isn't it culturally different when we compare standards of beauty?

The Illustration Art blog has a discussion on the difficulty of protraying women's faces, along with a number of fairly current examples of comic art (and one illustration piece) to give us visuals to discuss.

Comparing comics alone from the 1950's to today should point out just how different the make up that is generally accepted is, not to mention hair styles. How many lines can you put on a woman's face before she looks like she has crow's feet? Well, the answer is, how old is your character supposed to be?

My wife hates it when i put heavy shadows on my female character's faces, and my arguement is thus: if the men have heavy shadows on them, it will look awfully weird to not have shadows on the woman's face. If i am doing nothing by drawing beautiful women in the mid-20's then perhaps I should be drawing nothing but very idealized features with minimal shadows. But to do so leaves the reader with a far more vaccuous presence: you're not allowing the female characters to participate as fully in the story by making them always be beautiful and well lit. Screw that. Let them get hit by shadows and be a part of things. Life in not built around standing pretty and looking pretty, and the characters shouldn't be stuck in that role either. Besides, some of the sexiest stuff that i've ever seen in both illustration and photography has features hidden in shadow, cheekbones or lips lurking beneath the darkness.

If your character is a woman in her 30's or 40's, both of whom has basically vanished from both your movie screen and TV set, then its likely she has a few wrinkles and its up to you as the artist to show that. And make it work. 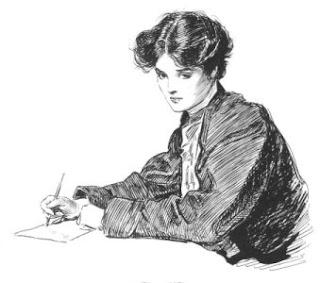 Besides, it was only 100 years ago that Charles Dana Gibson was drawing some of the most beautiful idealized women of his time, and creating them out of linework!

The beauty and intelligence of this woman have been captured for an entire century, and through beautiful use of delicate lines the structure of her face is delineated, including her cheekbones. That this very linear style has fallen out of favor says something about our media (what will and won't reproduce) as well as art tools being used.

Could Leonard Starr have created a number of delicate sweeps of a crow quill to further render his artwork? I've no doubt, but it wouldn't have played in the newspaper reproduction room, so Starr, just like Caniff, developed a style that could reproduce well. Within comics, there was a distinct shift in ability to print line work when the metal plates started to get thinner and thinner before being replaced by plastic ones in the late 1970's. Vinnie Colletta's Thor linework simply wouldn't have been reproducable only a decade later, let alone Gibson's.

Here's your homework: find a way to produce emotion on the face of a 17 year old girl. How many lines do you have to do that? And still make her look 17? A quiz will follow later! Class dismissed!
Posted by inkdestroyedmybrush at 4:46 PM

I'm not an artist and wouldn't know where to start when drawing anyone.
With that in mind, my comments are such:
Surely an artist should be producing honest work that depicts emotion and characters with depth, and as you pointed out, if you treat male and female characters differently because to include lines will make the women less hot, this becomes not only a sexist move but makes for a bad piece of work, because the female characters will be stale and like plastic mannequins.

I didn't know about the reproduction techniques, thanks for including that. Still, even with the use of less lines artists could still portray characters at different ages, right? So there must be other techniques, which I don't know, because I'm not an artist.

there are other ways, but they usually require subtlety and that is typically in short supply around comics, and sometimes even around illustration. The use of color can convey the change in a woman's face sometimes better than lines. I just think that too many people buy into the old line that you age a woman's face 5 years for each line you use.

Hear, hear! If you're inking in the more modern, "rough" brushwork style that essentially is a resurrection of 1920's illustrative styles particularly beloved of illustrators of stuff like Tarzan, you can also get the shadows and angles of faces without the thin lines that can look scratchy and "aged" as well. But Gustav Dore (or rather, his etchers/inkers!) also managed to get both softness and spiky sculptured effects from the same array of multitudes of very fine lines....

What it is, is (at best) laziness by artists who don't want to go to the trouble of drawing bone structure, and at worst, don't want to look at *actual* women (instead of photoshopped fashion plates) who - surprise, surprise! - have as much variation and prominent bone structure as men do.

But then, I was trained in life drawing classes, not drawing-from-airbrushed-fashion-mags classes...