Happy Birthday to the King. 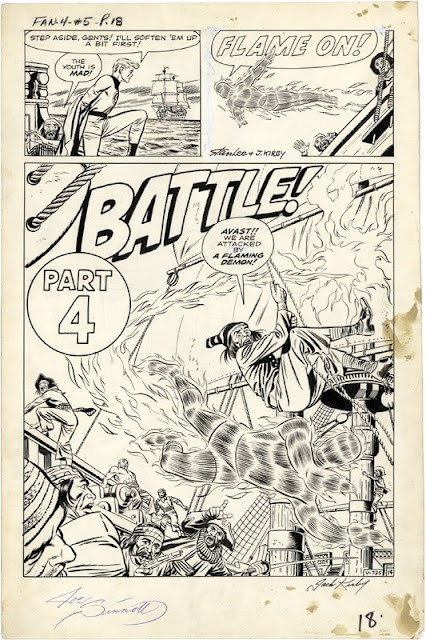 Posted by inkdestroyedmybrush at 9:19 PM 2 comments:

Robert Fawcett: Lights and Darks and the Whys and Wherefores

I have developed a deep and abiding love with Robert Fawcett, whose bio/art book Robert Fawcett: The Illustrator's Illustrator has completely overwhelmed, and was delighted when David Apatoff of the Illustration Art Blog, posted art that Fawcett had created to teach while visiting the Famous Artist's School back in the day. Not only are they delightful examples of his art, there is, of course, so much that we can learn from them. Now, thanks to the post from David, i'm sharing with my readers as well.

here are three different drawing of "They heard a knock at the door..." 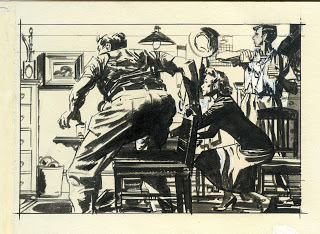 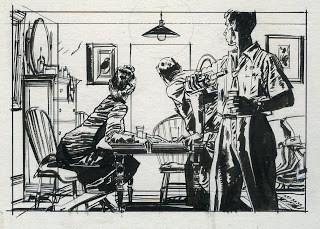 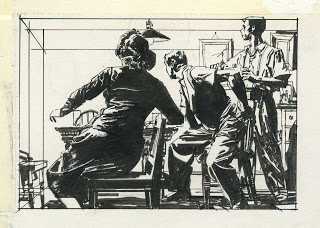 The emphasis was on the pattern of lights a darks within the picture to create tension, movement, interest. To help convey that, it appears that he then put tracing paper over the drawings and shaded in the darks, knowing that he could then remove the top layer with just the fascinating negative/positive patterns to make his point. 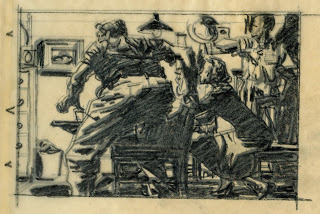 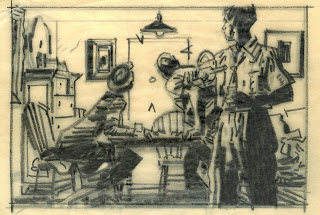 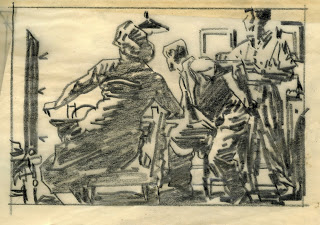 His handwritten instructions on what to learn from this exercise are insightful and interesting. And timeless. And if you can't get enough, here is another blog post on Fawcett by Apatoff for you to enjoy. 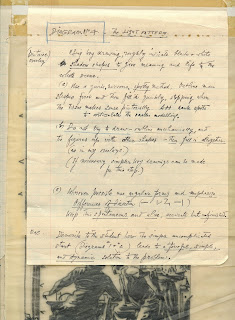 Posted by inkdestroyedmybrush at 9:06 PM No comments: 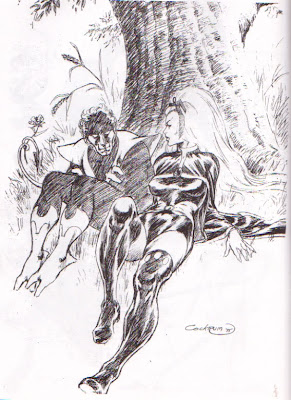 Just wanted to post this because, well, Dave was great. The Nightcrawler is actually pretty generic and the face is a bit long, but the Storm... well, Dave clearly has actually looked at women and captured the languid sensuality of her body language. The delicacy of her left hand in the grass is a small be delightful touch. Well done Dave. Miss ya.
Posted by inkdestroyedmybrush at 11:37 AM 3 comments: 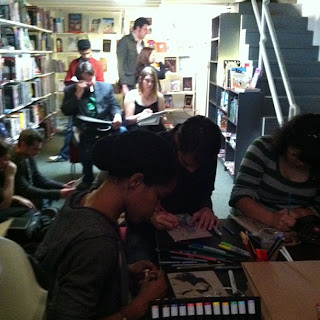 None of the drinks got spilled, which is pretty damn good, when you consider the amount of alcohol that was being consumed at the Drink and Draw last night. Kirsten, our bartender, had a bevy of interesting cocktails to keep us either 1 - on our creative toes or 2 - on the floor under the tables. Take your pick.

The house got packed and the had folks spilling out on the street, which the local folks must love. i'm sure James Sime knows how to handle the noise when all is said and done.

Dave Johnson, founder of the Drink and Draw movement, along with Dan Panosian, was on hand to sign books and spent a great deal of time sketching some rowdy penises. Good man. Keep the drinks coming. 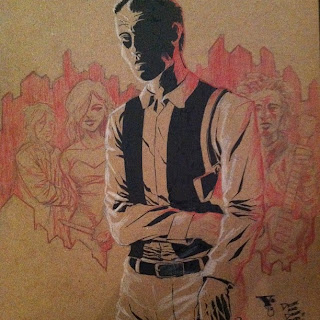 For my part, i knocked out the piece you see here, which keeping the alcohol further but no further than an arm's length. I inked and drew, all while holding a spirited discussion with Ted Naifeh, writer and artist of Courtney Crumrin over the best Batman artist of all time.

It was a great chance to see other artists at work, which can be rare, once you get out of school, to compare notes and get psyched by working around others.

Posted by inkdestroyedmybrush at 10:28 PM No comments:

Who is DC making comics for? I don't think that they know

Lets get right to it and say, "No, you don't." Which is kind of like saying, "The answer is 42." and, of course, not knowing what the question is.

Well the answer is in response to this:


“Batman did pretty well, so I sat down with the head of DC Comics. I really wanted to do Kamandi [The Last Boy on Earth], this Jack Kirby character. I had this great pitch … and he said, ‘You think this is gonna be for kids? Stop, stop. We don’t publish comics for kids. We publish comics for 45-year-olds. If you want to do comics for kids, you can do Scooby-Doo. And I thought, ‘I guess we just broke up.’”– Paul Pope, relating his attempt to pitch an all-ages (or perhaps young-adult) title to DC Comics, during his Comic-Con International conversation with Gene Luen Yang.

Now, it would be one thing if DC had a focus and Paul, who has a distinct creative voice, was not going to be part of that, but, and we can put this right on the table, DC is NOT making comics for 45 year old men. 45 year olds were brought up on Frank McLaughlin and Carmine Infantino and Joe Giella and Cary Bates and the Flash, and the classic JLA and Superman coming from Kansas and this new 52 is not their DC at all.
Perhaps DC thinks that the hypersexualized fanboy driven new versions of the characters, and the darker Green Lantern will appeal to the adults in the audience who haven't really grown up, but its clearly not happening. None of the these versions of the characters are recognizable to anyone in their 40's. Those of us in our 40's had to deal with the reordering of the DC universes when Crisis first threw a big blanket over continuity back in '85, but it was a fairly loving blanket, inclusive for the most part. But now they've rebooted so many times that all they have done is made a point of pushing away older fans to an extent that we've never seen before. Welcome to the NEW DC!
Now, combine that with Karen Berger's exit interview in the New York Times and you have the other interesting side to this:

Dan DiDio, the co-publisher of DC Comics, said there was “some truth” to these feelings of a shifting landscape, which he said were industrywide. For comics published by Vertigo and by DC, he said: “There’s not a challenge to be more profitable out of the gate. But there is a challenge to be more accepted out of the gate.”Mr. DiDio said it would be “myopic” to believe “that servicing a very small slice of our audience is the way to go ahead.”“That’s not what we’re in the business for,” he added. “We have to shoot for the stars with whatever we’re doing. Because what we’re trying to do is reach the biggest audience and be as successful as possible.”

So lets parse this: Vertigo, the line that primarily would bring in female readers, is being cancelled because "servicing a very small slice of our audience is [not] the way to go ahead.” How is it possible to go service a wider part of your audience when you've just cut out 50% of the population?
So, really, who is DC producing comics for? Do they know?
I going to go with: catering to the needs of 25-year old fanboys who don't need a lot of old continuity to deal with, like the Reis/Lee art style, don't have wives bothering them over blatantly sexist comics coming into the house, and don't want any of that DC produced "alternative shit" messing up their comic lines. Now, is this any different than the individuals who were going to enjoy Dr. Light raping Sue Dibney? Not really, but i do think that its already a different generation of young men pushing what meager sales are out there, young men who don't have daughters that they don't want to sexualize, young men who believe that they have a slightly nihilistic attitude towards life because they've played too much "Tour of Duty". Not the sort readers that  might wander by the Top Shelf table at a con.

Will DC succeed with this audience? Perhaps, but i'm thinking no, and it will be just a matter of time before they retrench. Again. And its not going to be pretty. Again.
Posted by inkdestroyedmybrush at 5:17 PM 2 comments: