Behind the Scenes: Do You Really Want To Know?

You know what my favorite mantra has been for the last 7 or 8 years? No spoilers. Even before Riversong started that mantra on Doctor Who, I find that I've moved from wanting to know all the behind the scenes info, all the gossip, to wanting to move back to the old days, days when i would pick up the comic, go to see the movie, read the book, and be entertained, surprised, delighted by the cleverness of the author, director, artist. 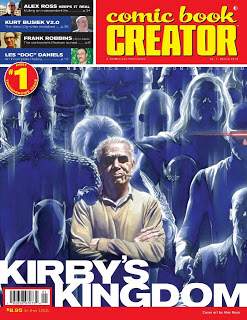 Two Morrows Publishing has started a new publication with Jon Cooke at the helm, Comic Book Creator, and its got all sorts of stuff on the torrid beginnings of comic books from the writer and artists.

Well, yes, it kinda does. However, they killed a Kupperberg piece that 20th Century Danny Boy prints that shows the DC production department and editorial in all their ugly, backstabbing glory. of course, its their right to kill anything that they don't want in their magazine, fair enough.

But it reminded me that most people don't really want to know the people who create their fantasy entertainment. They don't want to see the artist as he was: a chain-smoking, anti-semetic skirt chaser who cheated on his first two wives, and didn't cheat on this third only because he couldn't get it up, and who happened to draw pictures to support his bar bill. They want to read an article about their favorite old time artist who, it turns out, was a slightly quirky individual who loved fishing and classic cars. Well, there you go, you don't want to read the truth. Because, the truth is, comics paid terribly, the men who did them spent hours working their asses of drawing pictures that no one looked at twice, not their wives, not their mistresses, not even many themselves. Its not a pretty picture.

So, yes, while we've continued to mine the drek for diamonds, you have to ask yourself, do you really want to know?
Posted by inkdestroyedmybrush at 11:44 PM No comments: