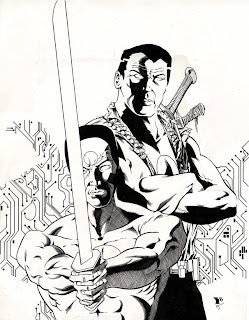 Another Valiant piece that I did as a commission.

I love the double figure composition and some of the interesting angles that come out of that. I stole the idea of the circuit board design on the back shamelessly from a Captain America piece that was reproduced at postage stamp size in Steranko's History of Comics. It worked so well with the concept of Rai's floating Japanese nation that I simply had to use it. I also like the idea of Bloodshot, who is usually presented as a gun-happy maniac, presented in a more relaxed, if wary, state.

Inked this up to work well in black and white, using the tight crosshatching that gave me a good greytone on Rai's body and face. Tough to do if you're not having a good day with the brush. They actually used to have a zipatone for that, so you could literally get away with murder and not have to do any of the rendering yourself.
Posted by inkdestroyedmybrush at 11:37 PM 2 comments: 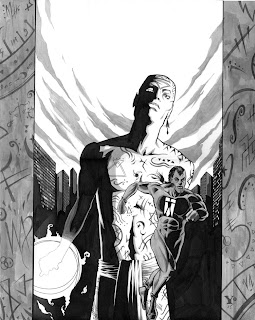 Just a couple of things while I work on the charity pieces for Super Con in San Jose. Given that I had the chance to touch a lot of the characters in the original Valiant Universe, I've had the fun of revisiting them via commissions, one or two I thought you might find interesting.

This, a Master Darque/Shadowman piece was done pretty big, 14x17, and I fought the paper all the way with the washes (until I was tipped off that I was using the wrong paper). personally, I can't stand the Shadowman character, never did anything for me and the costume is a pain, but Master Darque is a great villian, and almost more fun and menacing to underplay slightly with all the tattoos. I like his thinness in contrast to his power. I really enjoyed doing this piece, except for that damn paper....

Comin' next - more Valiant pieces and a look at the Michael Golden and Adam Hughes pieces I'm inking up!
Posted by inkdestroyedmybrush at 11:26 PM 1 comment: 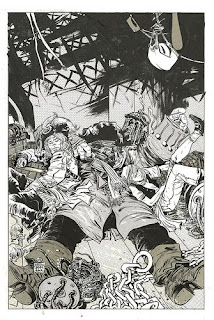 Pope never ceases to amaze me, and this illustration that I culled from his blog is great. Understated as hell, and a great nod to the early Lee/Kirby days when the Marvel Universe wasn't so ordered or so crowded that the amazing couldn't happen every issue.

And in the FF, it usually did.
Posted by inkdestroyedmybrush at 6:23 PM 2 comments: 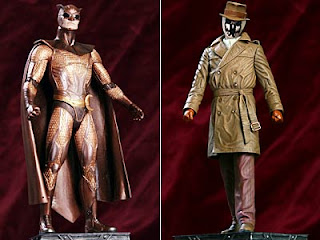 Who Plays With The Watchmen?
Posted by inkdestroyedmybrush at 4:25 PM 4 comments:

In Review Of: Lost At Sea by Bryan O'Malley 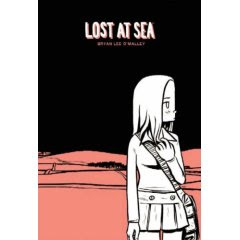 I wanted to like Lost At Sea, but I don't think that I can say that. There were elements of it, very truthful elements, hidden among a number of pages of fairly uneventful stuff. Which, come to think of it, is a pretty decent description of teenage years right there in itself.

Partly my problem is with O'Malley's art, which has the four main teenagers drawn like little kids, which is more than a little off-putting when they start to smoke and drink. I have no problem with a cartoony style for this sort of work, in fact, sometimes it makes the work richer to use characters that embody a broader facial style than a more realistic depiction, but works less well here. How much are we to care about Raleigh, who is 18 years old, has run away to spend a weekend with a boy and is now randomly hitching a ride with some people from her school, trying to make sense of everything on her way home.

Sadly, just about everyone that I know has had aimless periods of their life, when things seem to have been moving in quicksand, and while realistic, it certainly doesn't make for mesmerizing fiction. If there is any trick here, it might have been introducing the idea that Raleigh thinks that a cat has stolen her soul earlier is the book.

What is interesting, reviewing this book from lofty position of being an adult, is that I remember those times when you're 19, or 20 or 21 and you feel completely adrift, as if your entire world could spin on its axis on any one given event, and it really did feel like that to some of us. Putting this down in words and pictures is a difficult task, because the very instability of that moment is like a soap bubble: so very beautiful in its fragility. It is a time in many people's lives where things go right or go terribly wrong. There are moments that O'Malley captures that, and they're the best moments in the book.

Unfortunately, the book feels overlong, and really doesn't get to its point soon enough. The supporting characters are less well defined than Raleigh herself, and so the emotional climax is weaker than it should be. Bryan is trying, and craft is there, but it simply doesn't sell the point as well as it should.

Ultimately, Lost At Sea is a failed experiment in that it doesn't hold together. Bryan is clearly talented, and one miss here doesn't undermine his trying again, this just isn't the book that he was trying for.
Posted by inkdestroyedmybrush at 2:05 PM No comments:

David Kaufmann and the early comics: how Jewish are they really?

When is it more interesting to read a review of what isn’t there than what is? David Kaufmann wrote an Arts and Culture Column in the Jewish Forward in review of both Danny Fingeroth’s and David Hajdu new books on comics (Disguised as Clark Kent and The Ten Cent Plague respectively), focusing on the appropriate “jewishness” of the early comics and their creators.

Now, what has always struck me as interesting is how much of the sensibility was transferred in those early comics. They were, after all, produced in the urban areas with the publisher there in , and reflected the particular energy of those who grew up there, or those who had moved there, looking for jobs and opportunities. But the creators were making the effort to invent language and storytelling on the fly in a effort to make a buck and put food on the table that week, kosher or not. Lets face it, the early comic book history is an immigrant one, perhaps one that only happened to be jewish, but didn’t need to be jewish for it to exist.

Fingeroth, a former editor at Marvel, draws direct parallels between some of the early heroes and biblical jewish heroes, and really over-reaches with the parallels. David Kaufmann, in his review, also has to do more stretching than should be necessary to “find” the jewishness of those early issues of More Fun, Action, and Detective. I would posit that he should have been writing from this point of view: why, given the creators ethnicity, is there such a lack of “jewishness” in those comics?

As anyone who has read any of the history books that relate to the early years of the comic book field (Tales to Astonish, Kirby: A Life in Comics, Meanwhile…, Steranko’s History of Comics, Cavalier and Klay), there was no money anywhere, and the business was rife with a number of shady and dishonest characters. The jews that have given us multiple lifetimes of reading pleasure with their creations: Siegel, Shuster, Kirby, Eisner, Kane, Simon as well as so many others, were true children of the American dream: work hard, follow your dreams, and you can get ahead in . In this fledgling industry, Jacob Katzburg knew that a kid in didn’t want to read about Myron Abromowitz becoming a soldier, but Steve Rogers he might. Assimilation was the name of the game. And while it may have gotten a bad name in the last 30 years, if that was what it took to get you out of the lower East Side, then you did it.

Certainly it is easy to draw parallels to what the creation of Superman to someone with Jewish identity, but you could just as easily make the case that Superman is every 98 lb weakling’s fantasy: If they only knew how great I really am, they be singing a different story. And Captain was punching out Hitler over a year before , but those are exceptions to the rule. Batman has pretty much nothing of jewish heritage in his past, despite Bob Kane going to a seder every year. And I don’t recall the letters “THE SPIRIT” dripping down in menorah wax on too many splash pages.

In any case, it is enough, for me, that these books are being written, since they finally focus attention on the long suffering and mostly forgotten, for many decades, early Jewish creators themselves. David quite correctly makes the point that these stories matter since they continue to saturate our culture and touch our lives, regardless of the medium. We should be paying tribute to those early pioneers, jewish or not, since they matter so much to those of us who read and grew up on the comics.

Posted by inkdestroyedmybrush at 11:02 PM 2 comments: